Bartenders in Lego and the lessons they teach

I have 3 hobbies, booze, bikes and legos. For those that don’t know, there I said it, I love legos, I am out of the plastic closet. This weekend was northwest Brick Con and I got me thinking about making some lego bartenders, but I had to share the lessons I’ve learned from them.

That is me, with my rapier wit and ever present cup of “coffee.” What do I know? Not much, but I do keep an eye for learning from any body anytime and a six shooter (not pictured) of dirty jokes about marsupials. 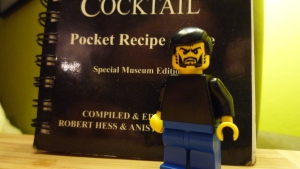 Dallas Taylor doesn’t always look so angry, but he often does. From him I learned when to shake a drink (when it has juice) and when to stir (when it is clear and only booze. This is rule number one for me in separating rubes from pros and I learned it from him. Dallas also taught me the importance of the book Kitchen Confidential.

Anu Apte is a study in grace. I have never seen a foot print that she has left, so I beilve that she floats about, un sullied by the earth. Anu moves in a way that implies: 4 years tap, 3 years ballet and 3 years modern dance. Also, Anu is clear evidence that a man named Zane Harris is lucky like no other man on earth, but is surely a shitty gambler as all of his karmic luck was spent on boyfriending Anu. 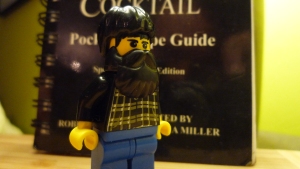 Will Ritthaler showed me the importance of looking things up. We were joking about the foreword to the Gentleman’s Companion, “not show fancy boy drinks like the Widow’s Kiss,” and we realized that we didn’t know what a Widow’s Kiss was, and Baker does not give the recipe for such a, “fancy boy,” drink. We had to look it up, like any bartender should when faced with an unknown drink. Also Will had, and should have again, have a beard so epic that it shames any homeless man. Lastly the first time I tried to get a drink from Will he kicked me out because my ID was suspect, lesson: don’t take chance on getting arrested because of fake IDs.

Professor Jacob Briars showed me that witty things I may say, should be slowed down, enunciated and emphasized for the general public. The speed at which the man speaks means that his brain is certainly fueled by vegetables and exercise rather than the animal fat and scotch like the rest of us. But his punch lines are crystal clear as is if delivered by certified mail. Jacob successfully sells vodka, the most maligned of cocktail bases to an audience that is unwilling to even shoot it, how? The twin guns of grace and tact, also he is a cowboy riding the horse of product knowledge. Lastly, I learned from Jacob that when one shakes a drink really hard, one makes the face one would make if he/she were having an orgasm. A curious but accurate observation to be certain.

Gwydion Stone knows absinthe. He makes it, drinks it and will be one of the first guys to bring it back from the absinthe murders and Czech fire to grace and dignity. Also, he rock Hawaiian shirts.

Paul Clarke, what can’t you learn from Paul Clarke? Go to his blog Cocktail Chronicles and learn something right now. Also Paul is great at humanizing all of the aspects of cocktail culture that get wrapped up is obscurity and seriousness. I have made gallons of Paul’s#8 falarnum. Reading Paul Clarke is like having a drink with him, though I must point out in person, he is more likely to use a potty mouth that he would never use on the blog. My favorite Paul Clarke line, “ gins proliferate in liquor stores at a pace envied by kudzu and bunnies.”

Jim Romdall taught me that he is the missing link between orangutans and men. At 5’7 with a 6’2 arm span, I call him the orang-tender. But seriously I learned from Jim that shoppers vineyard is an excellent substitution for the liquor board and well, the finest way to give people a truly meaningful x-mas bonus. I also learned from Jim that I am not alone in my belief that the best bartender have both dive bar and fine dining experience, and that mixing the best of both creates the gestalt of a better bartender.

Eric remembers peoples’ names, makes great drinks and blah blah, but he also knows that there are 3 months out of the year in which air conditioning is very important, and his bar delivers on this

From Dave Nelson, I learned to say less. And to honor that, I shall say nothing more than that. But I also remember a time were there were 6 drunk bartenders all asked to make the flaming blue blazer at the end of a long night, Dave bowed out leaving only 5 drunkards to toss about fire. I believe Dave is the only person without a scar from that night. Because Dave knows his limits.

Robert Hess wrote the backdrop of this photo shoot

Robert Hess is proof that the Riker Beard is still awesome. And also, like Dave Nelson, I have learned from Robert to say less and be subtle. Hess could walk into any bar, list 100 things they were doing wrong and never be invited back. But he doesn’t . The highest critique he generally levels is, “I might try something different.” He is a man along for the ride although in the mean time truly prefers that the ride be of the highest quality but will not mention such unless he is asked. That is a difficult burden that he bears well. 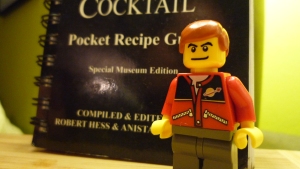 Donald Brady showed me that many of the dumb sounding drinks in the Difford’s guide are the best, except those garnished with whole doughnuts. Also, he is my harshest critic and never lets me pass off crap. It is hard to find someone who will honestly tell you that something is forgettable and to try harder next time. And a harsh critic that has your interests at heart is a very valuable way to grow. He has also informed me of the toils of cutting peat; awful back breaking labor, but I have served Donald scotches that are old enough that they could have been toasted by peat that he cut in highschool. There are no pizzas that I made in highschool still in circulation.

Amanda Womack is my walking fact checker. I often use her to back up outrageous claims that I make as she generally appears more responsible and sane than myself. I also learned from her to measure better. I learned to measure long ago, but there were several drinks that she made, much better than I, by using the simple technique of caring more about measuring. Jigger twice drink once. 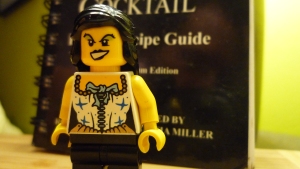 Chelsea “chuckles” North showed me how to better break balls without making somebody cry. I little Chelsea chuckle at the end of a scathing comment helps the medicine go down. 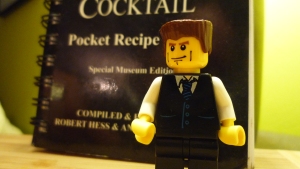 Jamie Boudreau enseigné m’à orthographier mieux en français et que les Canadiens parlent drôle mais nous shouldn’ ; t font l’amusement de eux parce qu’ils ont des soins de santé bien meilleurs que nous même si ils ont de mauvaises lois d’importation qui rendent le tequlia très cher. Also, even though he gets all this cred for being a molecular mixology guy, he is better at refilling a water glass than any other bartender ever. This is important because most good scotches need a drop of water to open up. Also, you need water to live and it should always be in front of you in a bar from the moment you sit until the moment you leave:professional. Two other things I learned from him, he was the first guy I met that used a y peeler instead of a channel knife to better control the oils going into a drink, this is a method I don’t know how I waited so long to learn. Also, he inspired me to use my own custom took kit suited to my own style. I however use a chef roll rather than Jamie’s suitcase because i admire the professional chef more that the traveling sales man but:De gustibus non est disputandum-which I learned again, from Dallas.

This entry was posted in Uncategorized. Bookmark the permalink.

8 Responses to Bartenders in Lego and the lessons they teach