The Classic Cocktails on the list at Mistral Kitchen

The Classic Cocktails on the list at Mistral Kitchen

My dog died, I mourned with a bottle, I got a new job, survived the holidays and put out a new cocktail list.  I thought the easiest way to begin to blog again would be to speak of this baby cakes new menu.  I have an 8 drink menu, here are the four classics on the menu at the new Mistral Kitchen.

The Bee’s Knees
The Bee’s Knees, Old Tom Gin, Lemon Juice, Egg White and Lavender Honey Syrup with an Angostura Bitters swirly on top not just for aroma, but also for sexiness
-Old Tom gin is a sweetened lower proof (80, as opposed to London’s 90 plus proof) version or London Dry gin, 99% of people alive today have never had this style of gin and 99% of people that don’t like gin, like this drink and Old Tom gin
-Egg white, by itself, egg white has no aroma or flavor, when it does, it has gone off.  Egg whites in drinks do nothing more than smooth out flavors and add a light fluffy texture.  Egg whites hide in all sorts of cooking, pre bottled drink mixes and desserts, it is no big deal, it is completely safe

Drink an egg and tell the health department to fuck off

-I dry shake with the spring of the hawthorne shaker, just because I can’t be bothered to keep batteries in the electric blender which is much better.
-When I shake an egg drink after the dry shake try to do a very fast very brief shake to maintain bubbles and less dilution 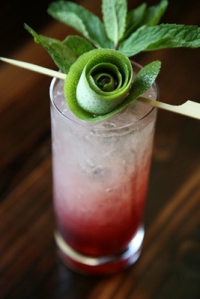 A sexy lady, the Armilito Chica

-This is another Gentleman’s Companion recipe.  Charles Baker, way back in the 20’s actually talked about how great and subtle tequila is.  This is a “pre margarita,” drink, technically a, “daisy, “ meaning a drink sweetened with grenadine. This drink is just tequila, lime, grenadine and orange flower water.
-grenadine- a syrup made from pomegranate juice, sugar, orange flower water and raspberries.  Actually more tart than sweet, ours is made locally by a guy named Miles who owns “Scrappy bitters, “ and works at tavern law
The secret is to pour the cap full of Orange flower water into the rose garnish so that it remains an aromatic garnish
-The other secret is the crushed ice coming from my mom’s home made lewis bags that will be featured on an upcoming blog

For the record, I think Trader Vic was an ass, this is the only good drink he every invented and it is often misrepresented, so I’ll give him credit and maybe restore the drink’s glory.  He made it up in 1944 in his restaurant and others have made it wrong ever since. It is important to understand that the Mai Tai is a big glass of  “fuck you up.”  It has 3oz of 80 proof booze in it and tastes like balanced candy.   It is a mix or cointreau, 2 rums, lime and the secret missing ingredient orgeat.  Note there are no there non booze ingredients. 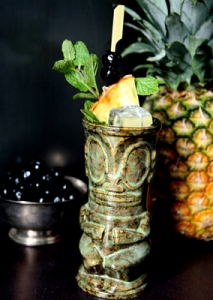 More fun than a barrel of monkeys drunk on mai tais

-orgeat- an almond liqueur made with almonds, brandy, orange flower water and sugar, you can make your own but I strongly recommend using the extra amazing one from tradertiki.com
-mint and pine apple-there is no mint and no pineapple in the mai tai but is it essential as a garnish

-btw-mai tai means out of this world, don’t step to the plate unless you can make that happen

Bergamot Blazer
Once upon a time in the 1850s there was a big fat show off named Jerry Thomas, he wrote the first bartender’s guide and amongst many other drinks invented the, “blue blazer,” a drink that lit aflame cask strength scotch and boiling water and tossed it back and forth with a touch of sugar.  This was actually just a really fancy way to make a shitty hot toddy.  Today, I have replaced the boiling water with earl grey tea (thus the bergamot), the scotch with cask strength bourbon and the sugar with elderflower syrup. The drink is served with a tea cookie because of the tea inspiration. 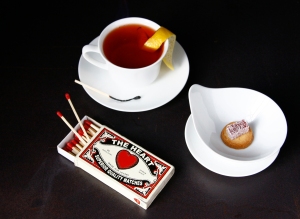 -cask strength whiskey- straight out of the barrel, none of that sissy filtering and water added.  Cask strength whiskey is normally between 110 and 135 proof, very flammable.  This year’s Booker’s bourbon from Jim Beam is 130 proof, very rich with a butterscotch and vanilla nose a blow your skull off proof.

So I promise to tell you more in the future about June Bohrer’s Old fashioned lewis bags and the modern cocktails and all about chainsaw Thursday.

This entry was posted in Uncategorized. Bookmark the permalink.