Bartenders that have been pissing me off lately: Clive, the Fox

Over the past year I’ve been traveling almost nonstop, and of course, drinking to match. And while I’ve been able to quaff cocktails in the world’s finest establishments, I’ve also been disappointed plenty, too. Some of the bartenders I’ve been running into lately have made me visbly angry.

I was sitting around with my editor this morning and she brought up a quote from this article,

“…if your job wasn’t performed by a cat or a boa constrictor in a Richard Scarry book I’m not sure I believe it’s necessary.”

And it got me inspired to draw a few of these comedic frustrations into silly cartoons.  They are anthropomorphic little expressions about how everyone has faults but me: 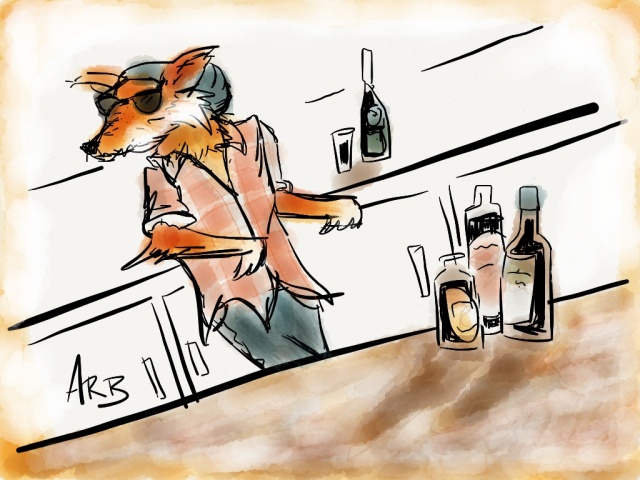 Clive isn’t a sly fox, he is a slick fuck.

Clive has one thing down about being cool, “don’t try too hard.” Clive might be asleep right now. He was bone luging before Intsagram ever  existed.  Bartender? More like “Amartender.* ” What is Clive’s deal you ask?

Clive is the hipster bartender and his fixe bike is locked up out in front of the bar. Every drink that he makes has an Italian amaro in it. The worse the amaro, the more he uses it. Amaro di S. Maria, I’m talking to you.

Clive has a signature move and it’s his lean. Most bartenders lean towards a guest to see what they would like to drink.  Clive leans away from the guest and employing a pressure-free sales technique. This casual nature ensures that you’ll get your cocktail…eventually… when he notices you.  Young bartenders: leaning forward is attentive and empathic, whereas learning back equals,

Ramazzotti is certainly Clive’s other crutch and sometimes he walks with a Fernet Branca pimp cane.  With 5 other amaros mixed shittily with 5 other base spirits he’ll write a cocktail list,

“Ripped off from Imbibe,”

In case you’re wondering: I drew this with an app called Paper 53, after I had dinner next to a guy named Georg who made this app that delightfully allows me to scribble little amusing cartoons. Georg is a great guy to talk to about schnapps, and he sure can intuitively digitize a creative process.

This entry was posted in amaro, Bartenders that have been pissing me off, fernet, nonino. Bookmark the permalink.

1 Response to Bartenders that have been pissing me off lately: Clive, the Fox